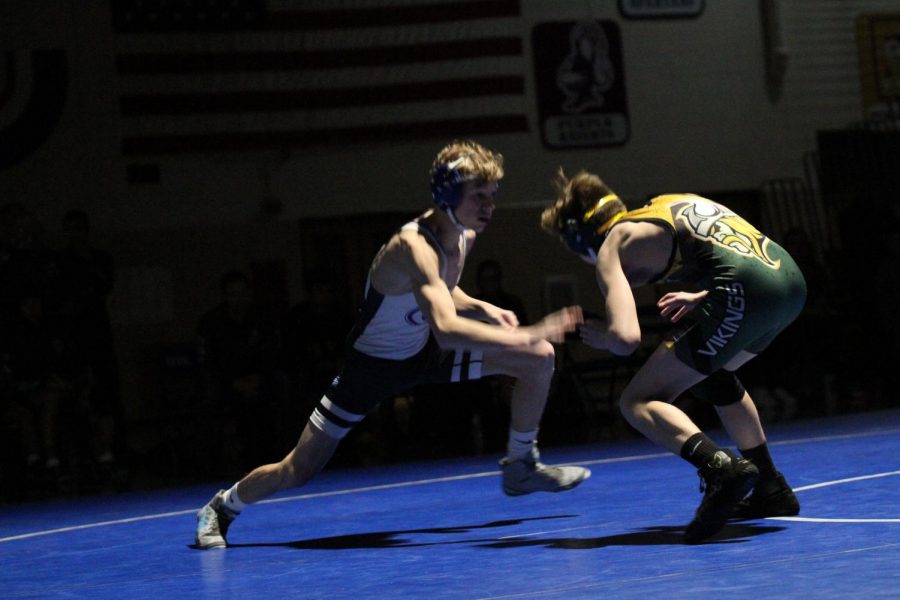 On January 14th, the Cougars huddled in a circle under the bright spotlight illuminating the center of the mat. The energy in the gym was electric, with the booming voice of the announcer and the packed stands filled with parents, students, and program alumnis. The cross town rivalry was stronger than ever and Craig came away with a dominant win, crushing their rival 59-18.
Joey Coulter started the night out strong, further edging on the fans.
“He’s a valuable asset to us and he started us off on a really good note,” commented head coach Mark Mullen.
Juan Armas, Julian Garcia, Joey Bellomo, and Mason Maclennan kept the team going strong, racking up points and taking pressure off the later wrestlers. These strong assets led the team to a dominating victory over Parker for the 52nd anniversary of the face-off, and the12th straight consecutive win in past years.
“Whenever you are going against someone from the other side of town, you want to show everyone who is the best in the city and our job is to be the best in the city and the conference,” said Coach Mullen.
Graduates of the program such as Keannu Benton and Nate Farrell were at the meet to cheer on their teammates, adding to the exciting and entertaining atmosphere created by the music selection and illuminating spotlight, showing the strength of the athletes. The crowd was packed to celebrate this annual event of cross-town rivalry.
“That’s awesome having those guys come back. Seeing someone like Keannu, who came back for our warmups; it’s fun for our guys to see him now. He’s obviously doing very well at the college level and when he says something to the guys, it means a lot,” commented Mullen.
Mullen commented that the program is headed in the right direction, beating Parker by the most points ever in the last few years and setting numerous other records. This program compared to others in the conference is yards ahead. The team looks ahead, hoping to win conference and regionals again, and take several individuals to state.
The winner of the other half of the conference, Sun Prairie, will face them for the conference championship on February 8th at Janesville Parker. Winning conference for the past few years, Craig hopes to repeat and continue on to win the regional title. Conference returners include Juan Armas, Mason Mclennan, Aidan Romack, and Mitchell Schumann.
Heavyweight Braeden Hopkins has proved a pleasant surprise for the team. They expect Mitchell Schumann to drop a weight class, gaining a competitive advantage that could send him to the state meet. The team hopes to send [to state] Maclennan, Getchell, who is in a tough weight class, Schumann, and Armas hopes to go back again.
The athletes and the coaches follow a basic motto: try to get better everyday as individuals and as a team. They will compete at the Madison LaFollette Showcase in a conference matchup on January 24th, the Fort Atkinson Invitational on January 25th, and at Craig High School vs Whitewater on February 4th. They will face their Conference opponent on February 8th at Janesville Parker for the conference title.