Spotlight on Seniors: Sawyer Sullivan shows up in style 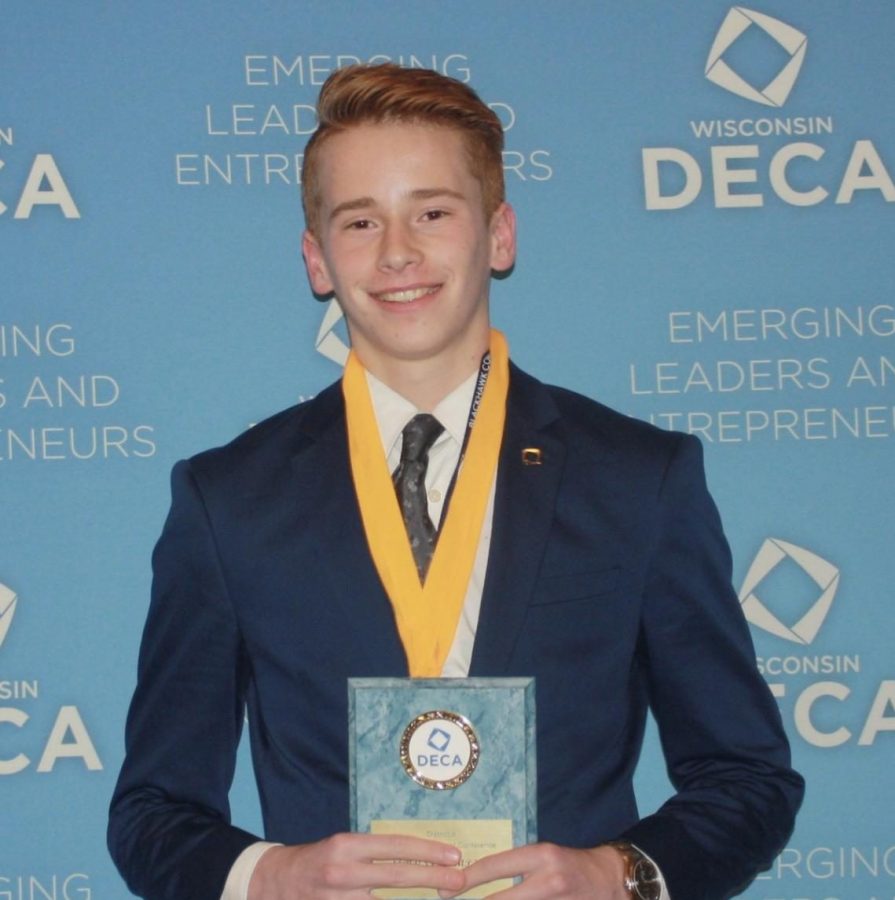 Dressing in a formal suit ensemble may seem odd to most high school students, but to Senior Sawyer Sullivan, it’s what he wears to compete. His dedication to business and marketing topics has made him a leader throughout the school.

Sullivan currently participates in DECA, and has been an active member since his freshman year, holding president this year and vice president last year. DECA has been running at Craig since the 1980’s and is an Association of Marketing Students. Students can qualify for various levels of competition, whether district, state, or international. Sawyer’s success in this organization continues DECA’s tradition of excellence. He qualified for state as a freshman and nationals for his sophomore and junior year.

In his sophomore year, Sullivan was a founding member of Investment Club and has been president for the past two years. Investment Club was created and guided by students in both content and leadership. They often discuss current events relating to the economy and take a yearly field trip to speak to business professionals. As president, Sullivan helps to lead meetings and discussions, fundraise for field trips, and “is vital in determining the club’s objectives,” says Club Advisor Brandon Miles.

Further driven by his passion for business, Sullivan restarted Future Business Leaders of America (FBLA) in the Fall of 2018, which was previously disbanded in 2007. This organization focuses more on business related topics in competition as opposed to marketing topics. Sullivan placed tenth at Nationals for FBLA in the Banking and Financial Systems category.

His passion for business stems from one of his mentors, Business Teacher Brandon Miles, and his involvement in Investment Club and DECA.

With the support and encouragement from teachers, Brandon Miles and Jennifer Larson, Sullivan continues his passion for business and they believe he has a bright future in the field. Miles and Larson have given him the opportunities, resources, and encouragement through DECA, Investment Club, and FBLA for long-term success.

“Sawyer is a dedicated student with a bright future. He shows a real passion for business and I think he’ll go far because of his willingness to work hard to get what he wants!” says Brandon Miles.

Success seems to follow Sullivan wherever he goes. He has a high GPA of 3.959 overall and a 4.0 GPA in CTE (career/technical education) classes. This summer, Sullivan added to his extensive resume by completing the Rock Internship Program at Johnson Bank where he assisted with the commercial lending process.

His involvement in Craig expands beyond business-centered extracurriculars. He is a member of Spanish National Honor Society and National Honor Society. In the spring, Sullivan can be found volleying on the tennis courts as he’s been involved with the sport since eighth grade. The remaining time is consumed by managing the Cougar Den along with a handful of other students. The main focus of his managing is inventory and scheduling.

Sullivan is in the process of applying to colleges, specifically UW-Madison, where he is hoping to major in finance. Sullivan’s journey has been a long yet successful one. He continues to learn more each day, and is looking towards his future.